1) When did you form? What was the lineup then and what is the lineup at present?
Melanie: BLEEDERS' first show was February 5, 2016 at Spaghetti House. It was just Brenna, Kay, and Matt at the time. Since then they've added Erin on bass and me on auxiliary drums. Then Erin left over her other band's schedule conflicts and now we have Andrew on bass.

Kay: After Me and Matt's band Ghost Dads broke up we started jamming with our friend Brenna. This was in December of 2015. We eventually added our friend Erin McDonald on bass and The Hairy Hag Mel as our second drummer. Thats the lineup we recorded Gash with. Erin left a few months ago, she had a heavy load with trying to finish up school and her other band Suburban White Males. So we added our friend Moonman on the bass.

2) What was the motivation for forming? What is your objective, in your own words?
Brenna: I don't know that we had any specific motivation for forming other than having fun, but we definitely ended up having a clear feminist agenda, mostly due to the fact that I literally don't know any other way to exist; I honestly wouldn't know how to write lyrics about anything else, it just wouldn't make sense to me.

Melanie: The other members have been good friends of mine for a while and Kay has been coaxing me to start playing music and join his band since he was in Ghost Dads. I kind of hate making noise but Matt helped me learn to play drums so here we are. My objective is to have fun with my friends and get our message out.


3) I was able to see you live a few months ago, and I was really impressed by both the intensity and some of the visual aesthetic that was rolled into the show. Would you care to speak about what goes into that intensity for you, and about how you’ve explored your visual aesthetic?
Kay: We are a rock band and we want to rock the fuck out, as corny as that may sound.

Melanie: We're angry about all the oppression and abuse that's going on across human societies, which stems back to the relatively recent conception of both patriarchy and civilization. As for the visual component I wear a costume to compensate for my lack of musical contribution (there's probably a reason most bands only have one drummer) and to hide my face so I don't get stage fright. I'm also really into depictions of Goddesses that are frightful and desexualized.

4) Bleeders first came to my attention in the MRR demo reviews, where I liked the description of the self-titled tape. That first tape was aggressive in more of a No Wave way, to me. The followup, Gash, seems to have more dynamic range. They both sound awesome. Talk about the evolution.
Matt: I think the change of sound from the demo to Gash was from us just jamming as a 3 piece and recording as a 3 piece with the demo. Just me on drums, Kay on guitar and Brenna singing. Then with Gash, Erin McDonald was on bass and that added a low end, making it more heavy and rocking. Melanie also joined and added to the heaviness on the drums

Bren: Personally I was never in a band before Bleeders, so I kind of developed my vocal and lyrical style a bit more after the first recording. I still have no idea what the fuck I am doing but I'm learning.

Matt: Probably a lot of the "No wave" sound comes from us having no idea what we are doing. I don't really know how to play drums, never really played a kit in a band before.

Bren: Yeah, I believe Kay said on Feb 10th that we will have been a band for a year and it's really satisfying to see how much we have grown as a band in that time.

5) What are the things that are exciting you about this tour?
Melanie: I'm excited to play with two female-fronted punk bands, one of which is self-described radical feminist. Traveling with other bands is a great way to get to know differing perspectives and collaborate on shared visions.

6) What’s next for Bleeders after this tour? What’s on your agenda for the first half of the year?
Melanie: We have a lot more shows coming up at our house venue in Kutztown and we have a lot more songs to write! We're set to record with our local friend Joe Limbus once we get a few more songs solidified.

Kay: Record our new songs and write some more. Work on a few videos. Play places we never been and of course get our asses back to Buffalo.

7) Name check some musical influences for BLEEDERS
Melanie: Evil Sword, the Melvins, Breeders, Ursula, Sex Band, Palberta, deadman, GULLET, and Mr. Bungle inspire me personally. I don't know if any of that comes across in my playing—I'm just trying to keep up with the other BLEEDERS!

8) Outside of music, what is something that you’re forward to in the next couple months?
Melanie: 2016 was a rough year for everyone and I'm looking forward to 2017 getting a lot worse in many of the same and in unexpected ways. Summer is always a good pick-me-up though!

Kay: I do not have a life outside of music besides my job as salesperson at a failing music store in my town. I am working with Mel on editing together a video project for the band Evil Sword. They are one of my favorite bands and I am really excited to be working on it. 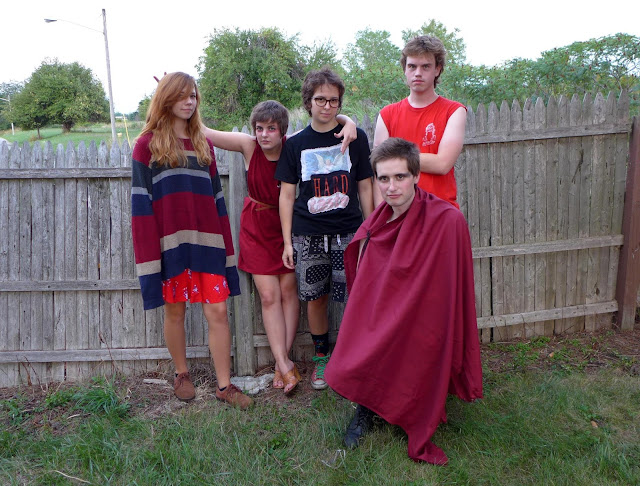 9) Say anything else you wanna say
Melanie: May patriarchy fall!

Closing thoughts:
It rules that I bumbled into a band that likes the Cardiacs, has something to say, and puts on a real-ass SHOW in just their first year. See BLEEDERS yourself this weekend with Ellen & the Degenerates and Sister Munch. 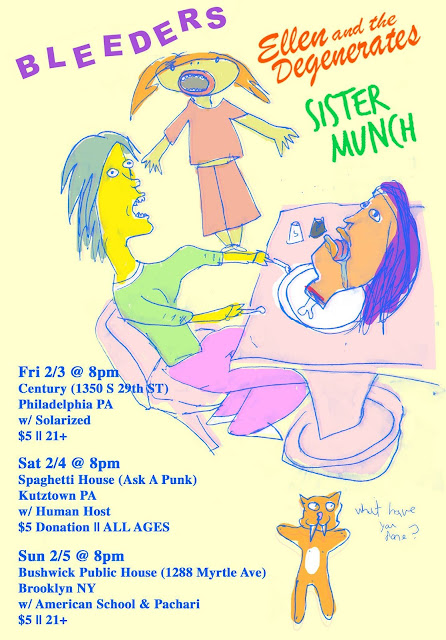