First thing’s first! You have a new LP coming out this month, "Total Party Kill", on WFBR–congrats! Can you tell us a little about the album and what the What’s For Breakfast family and fans expect compared to your other releases?

Well, we have been playing the album live around town and most people describe it as "primus-infused speed metal", which we certainly take as a compliment. We don't think we sound much like Primus, but can you think of even one more bass-forward rock band? Maybe Tool, but hey, do we look like a bunch of tools?... Don't answer that.

How artistically aroused were you guys during the pandemic? Is Total Party Kill your pandemic progeny? If so, how was the creative coitus?  I know we all had to keep the lockdown interesting…

I think the answer is "Not very". We spent a lot more time in uh... "self coitus" than we did in any sort of musical circle-jerk. The lockdown was very politically stressful and music didn't seem like the most important thing at the time... We spent a lot of time practicing for the sake of it I suppose, but really it was a musical break from what has essentially been 15 years of straight live playing for each of us.

You guys have also been touring, playing locally in Chicago, and really getting around since things started opening up. What is it like being on the road again? Are the people and places the same? Are they using protection?

"You know how much masks cost at shows post-2022? We dunno, nobody ever used them."

Besides the lax covid protocols, people are, how do we say... FUCKING STOKED for live music again. Especially with the younger kids we play shows with... I can't really imagine what it must be like to turn 19 and have your volition and freedom for the first time, and then being stuck inside for two years. Getting out must be a huge relief.

Are there any stand-out experiences from playing live recently?

Kangaroo Court at Subterranean was very fun, but we also played a "no-moshing-allowed" house show that had more moshing than most of our shows this year... it was a reminder that yes, indeed, we are too old for this shit.

What’s the next thing we can look forward to from Lollygagger? Is there a tour we can expect or maybe another release in the pipeline? Have you been able to resist one another–creatively speaking?

Covid being as it is, we've been resisting any tour over three days. It is a lot of work for something that might possibly fall apart on day one, so instead, we have a lot of video work planned... keep your eyes out in 2022 and beyond!

Lastly, what’s the first drink you buy for someone new to Chicago? Malort has a reputation at WFBFest, but what’s your expert opinion as a chi-town native? You all seem like the kind of folks any Breakfast Head would want to get to know ;)

Malort is the first drink we buy for OTHER people, as a rite of passage. Like, if you don't want to drink gasoline and make faces, wtf are you even doing in Chicago? As for us, we're a Coors band. These beer bellies don't tame themselves now, do they?

Preorder the Lollygagger LP in the store or get it at The Empty Bottle in Chicago, IL on Monday, June 27. See them tomorrow night (Saturday, June 18th) at Golden Dagger in Chicago, IL. Follow them on socials, predominantly on Insta @lollygaggermusic
Interview provided by Skyler Gambert. Check out his band The Wirms and stay tuned for news on another Wirms/WFBR collaboration.

The newest addition to the WFBR family of contributors is Chicago's LOLLYGAGGER and their vinyl debut "Total Party Kill" invades homes to black bag squares this summer. We're talking a semi-articulated eighteen-wheeler loaded with enough layers of guitar to make Ronnie Spector jealous, the juiciest bass heard in Chicago since Frankie Knuckles was king, the biggest drum sound outside of an arena, unsold copies of A People's History, a barrel with all the sweat and B.O. generated by the hardcore scene circa 1981, and just the essence of the gnarliest underground Norwegian black metal. This is a band that has been grinding through basement sets, small room sets, midroom sets, heading upriver to plunge a bayonet right into Kurtz's heart, and every harrowing experience has been captured on tape and melted into 160grams of PVC.

Release show 6/27/2022 in Chicago, IL, USA, Earth, Milky Way. Preorder ships then or before if possible.

Preorder today at the store. 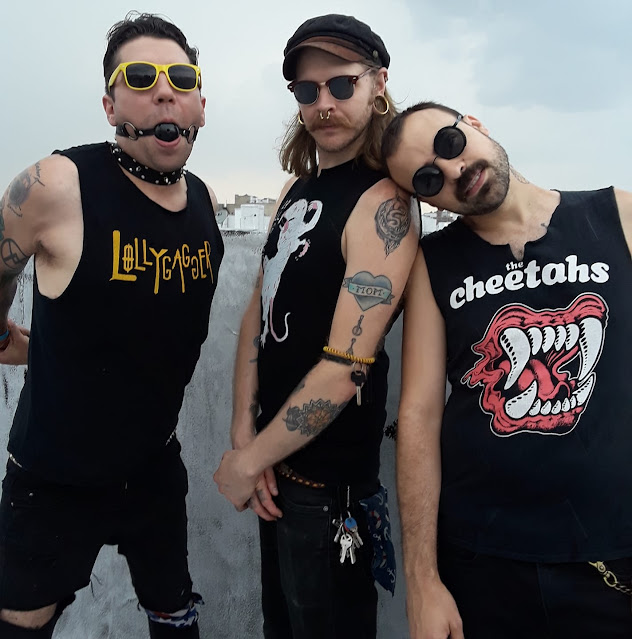