I'll edit some pics into this post later but I need to get this live yesterday and I've been thin on time since probably 2004 or so. It may look janky but it's a real-ass PayPal sales button and they take their fee so you're covered by buyer protection and allllll that good stuff.

Salty from Kansas City, MO and Musclegoose from Fayetteville, AR are debuting on WFBR at the end of the month. You can preorder right from this post by following the sale instructions, or at the bandcamp & storenvy (storenvy fees mean it's only better to order there if you're making a big order with distro stuff in it). Both of them slam. I'm working on some late game track premieres for these new titles, but you can hear a little something old right here.

The Stools have a 45 out on Third Man Records! You should buy one from the band, or if you can't do that, get it from Third Man. They've sold out their copies of their WFBR title "Milk River Blues", but you can get yours today before it's gone. Check the sale. 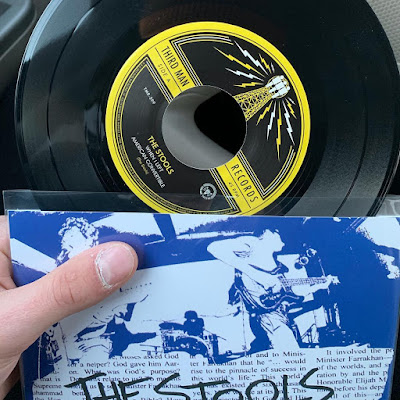 I'm freehanding a sale right here using Paypal buttons. Basically, the first item is $5, the second is $4, the third is $3, the fourth is $2 and the fifth is $1. There's a postage bump from $4 to $5 on the third item. Pay with paypal and I'll reply via email to inquire which titles you want. Items available include the pre-orders. If your order includes a preorder, it won't ship until the last week of March.

Most of these tapes are down to 25 or so, some are in the single digits. Orders fulfilled first-come, first serve.
Prices include shipping in the USA.