Nine Questions with The Fuzzlers 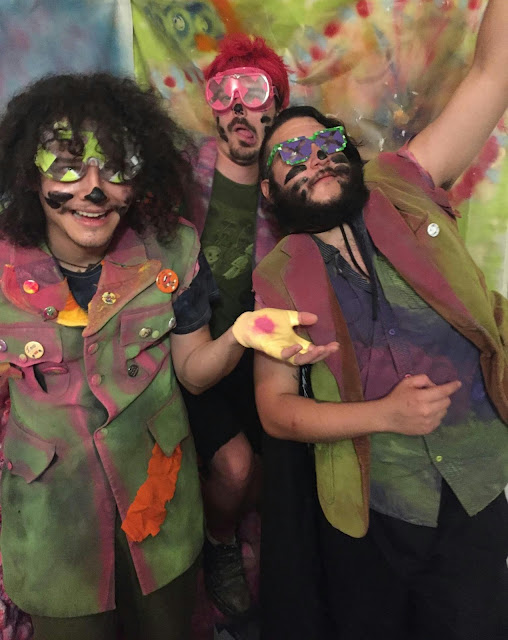 Athens, Georgia Foam-core gak splatters The Fuzzlers are leaving today for a tour with garage punkers Linda, culminating in an appearance at SLOP FEST in Athens (with WFBR contributor Mr. Clit & the Pink Cigarettes!). I've known guitarist, singer, and ringleader Fuzz-E since 2010, and I was able to corner him into giving me the dirt on this tour. They'll have their new tape, the CYBER EP (WFBR-011) with them. If you aren't on their tour path, the tape is taking preorders in the webstore, with shipping between July 23 and July 30.

WFBR BIG WIG: Let's hear that back story—what's the lineup and when did you form?
FUZZ-E: We formed in 2010. The exact details are foggy, because Professor Scientist was doing lots of testing, giving us lots of abuse. The Fuzzlers are me on guitar and vox, C-Fuzz on drums and vox, and T-Fuzz on bass and intuition.

WFBR CIGAR SMOKING CHUMP: You've got a pretty enviable aesthetic. How'd that come about?
FUZZ-E: When we escaped Professor Scientist's lab, we found some weird coats and stuff in the dumpster. We put them on to make our stealthy getaway through the lab facility. But we were just sucked into Cyberspace and all of our coverings were altered. Now we sort of look like henchmen from an 80s action flick...but whatcha gonna do?

WFBR BLOOD SUCKER: Who are you battling on this tour and why?
FUZZ-E: Our constant struggle is against Professor Scientist. He's our creator, but he's not a very good person. He sabotaged our WiFi and trapped us in cyberspace.... There's territorial hardware heads here and they're constantly battling for supremacy. Sacintosh is one of the main factions here. Macrohard is the other. We've seen some cyber face-offs. We do have a friend here, the Troubleshooter. He's helping us out. And per usual, Hungry McGee will surely make an appearance and eat up all our fuzzballs.

WFBR CAPITALIST SWINE: Tell us a bit about Linda and about Slopfest.
FUZZ-E: Linda is a great garagepunk band from Athens. They just released an EP called "This Is Not a Sun, It's a Butthole". They've got great songs about losing your mind and trying to figure out what this is all for. All good, super handsome dudes. The Fuzzlers are looking forward to sharing the road with them. Slopfest is a festival that was originally created by my friend Derek Wiggs as a quick replacement for Athens Pop Fest when that was cancelled. Everyone loved it, so he's continued to do it for a decade now. All proceeds benefit Athens Girls Rock Camp. Slopfest is what's up.

WFBR FUTURE BURGER FLIPPER: Go ahead and name check a few preferred musical influences for The Fuzzlers.
FUZZ-E: Some of our influences are DEVO, The Dead Kennedys, GWAR, The Residents, Bad Brains, Minor Threat, Ace of Base, The Scream Savers 7", Peelander-Z, and, while it's not a "musical" influence, Kaiju Big Battel is a huge inspiration in what we do.

WFBR GROSS MORON: What's something you are excited about on this tour?
FUZZ-E: I'm excited to see all my buddies on the road and play some rowdy shows. Linda and The Fuzzlers have set up a kind of photo scavenger hunt with each other on this tour, so that's going to make things very interesting. I'm stoked to find some new Pokemon along the way as well! Plus it's always great to spread the word of the fuzz across the land.

WFBR CERTIFIED LOSER: What are The Fuzzlers looking forward to later this year?
FUZZ-E: The next adventure for The Fuzzlers is already on the horizon. Professor Scientist has shown a little too much interest in the Gourd of Truth...and we think he might do something shady in order to obtain it. We're keeping our eyes and ears open. Our human representatives are doing the same.
WFBR SECRET ALCOHOLIC: Outside of music, what are some things you're looking forward to later this year?
FUZZ-E: Beyond music, I'm excited to see all the things our visual artist friends are cooking up! Some names to toss out there would include: Austin Lonsway, Laura Maria Ramirez Giraldo, Tarek Patton, Triple Bummer, Adrienne Tabet, Anthony Gaskins, Scott Hensel, Dain Marx, Art Whore Cult, Hemlock Bootlegs, Christopher Liver, and a bunch more.

WFBR SAD CLOWN: Last call, say whatever else is on your mind.
FUZZ-E: There's a little Fuzzler inside of everyone. Come to a show and let it out!

The Fuzzlers & Linda are on tour as of TODAY. Go see them! 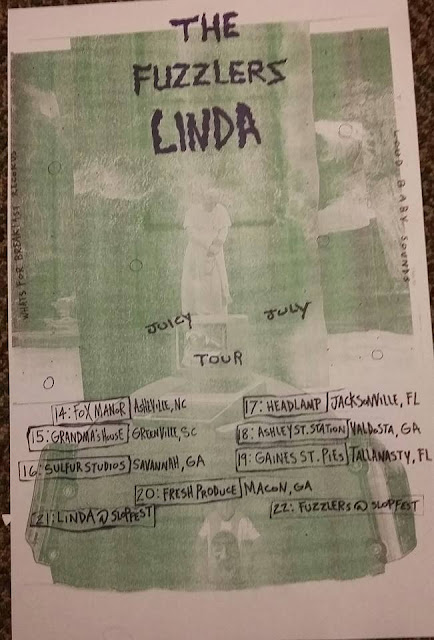 The Fuzzlers on Facebook and Bandcamp
Linda on Bandcamp